The first puppets on television - by my dad

﻿﻿﻿
﻿﻿﻿ My dad was probably the first person ever to perform puppets on television.  He performed under the name of Pantopuck.

History (or Wikipedia) will usually tell you the BBC television service started in 1936, but my dad appeared back in 1932, in a transmission using the old Baird mechanical scanning disk technology.

Looking at the radio listings in The Times (see below, listed as A.R. Philpott), you may notice that the sound went out through one channel (261.3m), and the picture on a different wavelength (398.9m)!

I have no idea how many people in the UK had receivers at that time.

In an article in The Stage Nov 28 1957, Charles Trentham writes:

Pantopuck tells me that in August 1932 he wrote to the BBC Productions Department suggesting a try-out, enclosing photos. His puppets were auditioned in September and Producer Robb then asked if he could perform on October 19 1932, for 10 or 15 minutes. 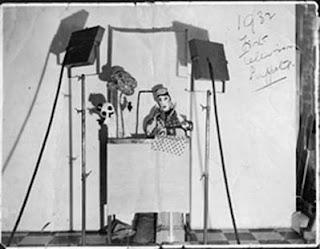 They rehearsed in the morning and went on the screen at 11 p.m., other items being a lady palmist, a lightning sketch artist and a Babylonian dancer, from the old basement studio at Broadcasting House. The puppets had all been repainted black and white, with costumes to match, and Pantopuck made a special stage to suit the camera range: the usual lively movements of the puppets had to be slowed down somewhat. There was a large team of ‘sound effects’ men.

A note in "Radio Times" announced that “the Pantopuck troupe” would be the first to face the camera – and attributed the bright idea to the director. Mr Philpott was asked to return, doing a Christmas play on December 27, 1932. Although the puppets came out very well on the screen, which flickered like the early Bioscope films, Pantopuck missed his ‘live’ audiences out front. Apart from once appearing in “Picture Page” at the “Ally Pally” he says that he has had no further interest in his puppets being screened, although he thinks the TV possibilities are much greater than the results so far seen. A “roving eye” camera treatment – showing the puppetman arriving at a hall, setting-up, with shots of the audience during the show, and of the puppets and backstage – would be interesting, he suggests. But to him, however, the direct contact with audiences is the real joy of performing. “Pantopuck and his Puppets” were in television 25 years ago. Can anyone claim an earlier appearance?   Charles Trentham

February -- BBC declares EMI the victor in competition.
From then on the ‘modern’ electronic television service, with 343 scanning lines, etc – was adopted.

Panto on Wikipedia
Some more details on Toby's old website